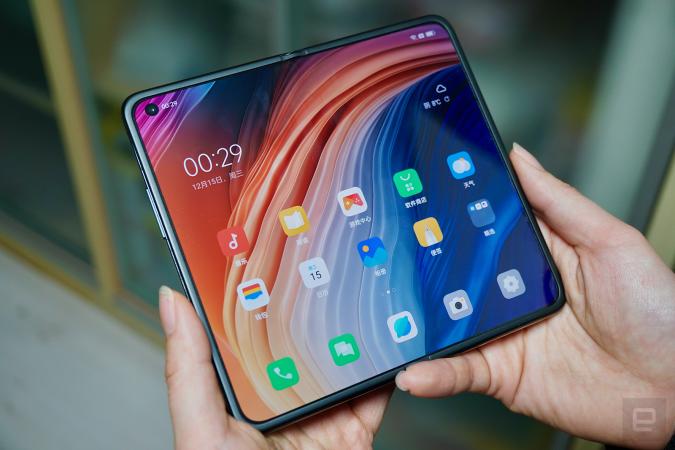 Samsung’s three generations of foldable phones put it in a leading position in the field, so much that Huawei and Xiaomi eventually followed the same double-screen form factor. Having already shown a foldable prototype a couple of years ago, it was only a matter of time before Oppo, the world’s fourth largest smartphone brand, would join the scene. After a teaser from earlier, today the Chinese company unveiled the Find N, which features a 5.49-inch external display and unfolds into a 7.1-inch flexible “Serene Display.”

What’s special about this design is that Oppo went for a landscape aspect ratio — 9:8.4 (1,920 x 1,792), to be exact — for the flexible AMOLED screen, which offers a more practical split-screen usage. A bit like Microsoft’s Surface Duo 2, except this is across one single panel. Similarly, the Find N’s external AMOLED screen comes in a more familiar 9:18 aspect ratio (988 x 1,972), as opposed to something like the narrow 9:24.5 on Samsung’s Galaxy Z Fold 3. The shorter body should also make the device more pocketable than its competitors. 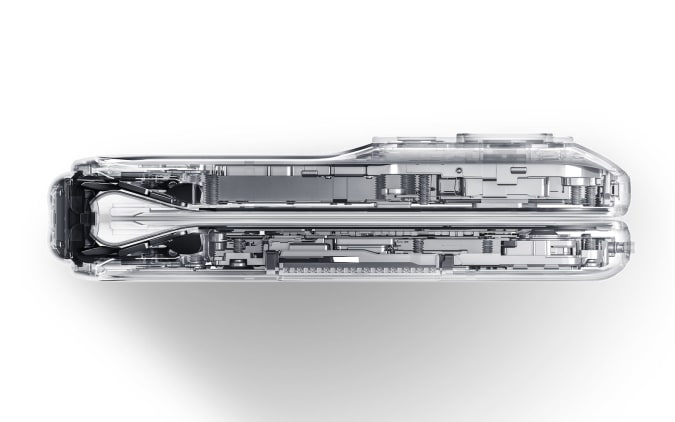 Oppo added that thanks to its special water-drop flexion hinge design, it’s able to widen the angle of the flexible panel’s fold, thus reducing the crease — “up to 80 percent less noticeable compared with other devices,” which is apparently certified by TÜV Rheinland. The same mechanism allows for a no-gap design when folded. As for the flexible screen itself, its 12-layer structure apparently lets it withstand over 200,000 folds — even at temperatures as low as -20 degrees Celsius or -4 degrees Fahrenheit. Alas, there’s no IP rating for the Find N, but Oppo reassures us that the device has passed the company’s own humidity and splash tests.

To our surprise, the Find N is powered by Qualcomm’s slightly older Snapdragon 888, as opposed to the upcoming Snapdragon 8 Gen 1 or the existing Snapdragon 888 Plus. Oppo explained that this is due to the longer development cycle of this project. To be fair, this 5G chipset is still plentiful, plus the phone also comes with up to 12GB of LPDDR5 RAM and up to 512GB of UFS 3.1 storage, along with ColorOS 12 based on Android 11, which should keep things running smoothly on that 120Hz flexible screen (though the external screen is capped at 60Hz). 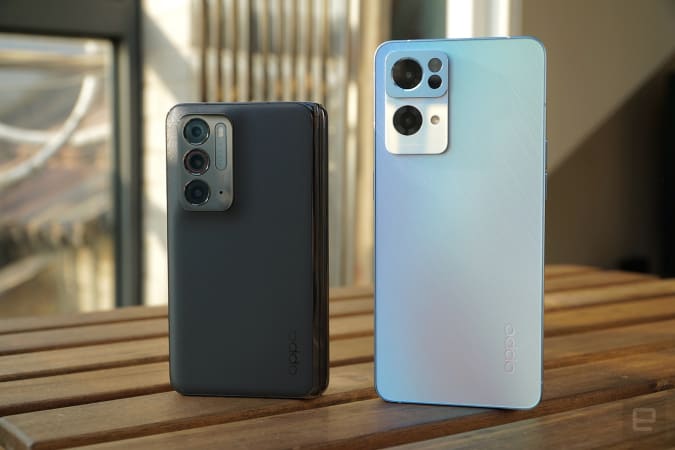 Other goodies in this 275g device include a 50-megapixel f/1.8 main camera (Sony IMX766 sensor; same as the Find X 3 Pro), a 16-megapixel (IMX481) f/2.2 ultra-wide camera plus a 13-megapixel (Samsung S5K3M5) f/2.4 2x telephoto camera on the back, and a 32-megapixel (IMX615) f/2.4 punch hole selfie camera on both the external screen and the inner screen. There’s a 4,500mAh battery which supports 33W SuperVOOC rapid charging and 15W AirVOOC wireless charging; you can also use the phone for 10W reverse charging.

Unlike many recent flagship Androids, unlocking is done with a side-mounted fingerprint-scanning power button, rather than an under-display fingerprint reader, which makes sense since it’d be a bit ambitious to work that sensor into the large flexible screen. 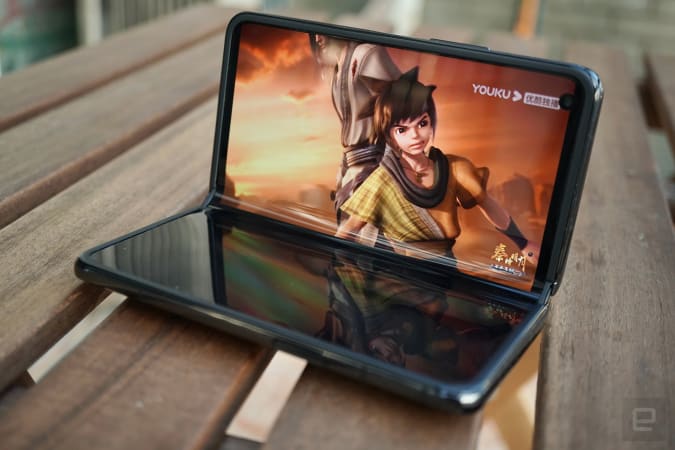 On the software side, this version of ColorOS 12 comes with a “FlexForm Mode” which lets you use the Find N in the form of a mini laptop. This applies to use cases like video calls, taking notes, taking 4K time-lapse photos of the sky and more. Likewise, you can use the external screen as a selfie viewfinder, though this is nothing new in the world of foldables. 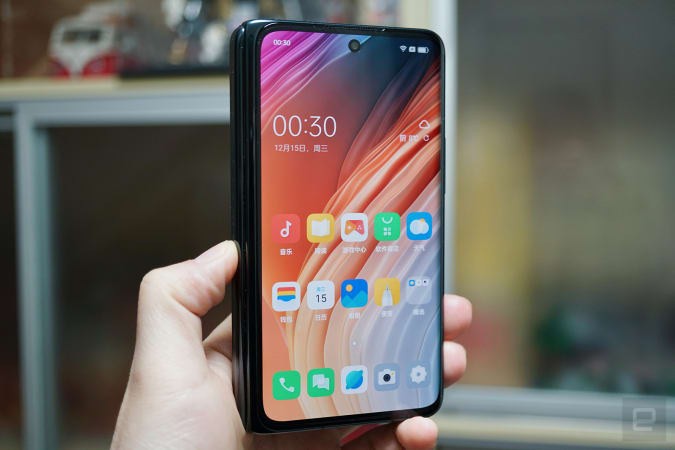 My favorite feature here is perhaps the split-screen gesture: simply use two fingers to swipe down the middle of the flexible screen, and you’ll instantly split the screen into two. You can also tap the three dots in the middle of this virtual divider to create a shortcut for the current app combo. If needed, you can also use four fingers to pinch the large screen to turn the current app into a floating window.

Last but not least, there’s a “seamless relay” feature which lets you easily go from the large screen to the smaller external screen. As soon as you fold the Find N, the external screen will offer a five-second window to let you swipe up and activate it. 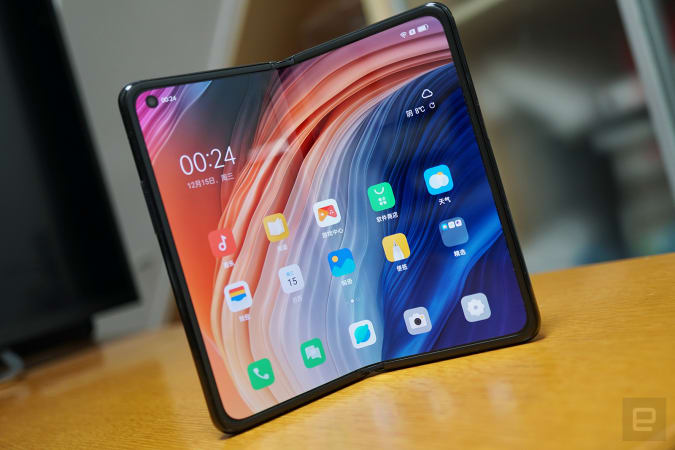 The Find N comes in black, white and purple, with the purple offering being exclusive to its higher-end model. In China, this new phone is immediately available for pre-ordering ahead of its December 23rd launch, with the base model (8GB RAM and 256GB storage) asking for 7,699 yuan (about $1,210), and the higher-end model (12GB RAM and 512GB storage) going for 8,999 yuan (around $1,410). That’s surprisingly affordable — even more so than Xiaomi’s Mix Fold.

Sadly, Oppo doesn’t plan on bringing its first-ever foldable to outside of China just yet, but our review unit did just land on my doorstep a few hours ago. I’ll be spending the next few days figuring out whether this device lives up to its hype (and whether I can even run Google services on it), so stay tuned for our further impressions.