You are here: Home / Computers and Smartphones / Canon's flagship 24-megapixel EOS R3 arrives in November for $6,000

Canon has officially unveiled the EOS R3, its flagship mirrorless camera designed for sports, action and wildlife photography. With the release, it has now filled in the blanks for key specifications not yet revealed in earlier teases, like resolution, ISO range and video capabilities.

The EOS R3 was never likely to be a high-resolution camera as some folks hoped, but the 24.1-megapixel, back-side illuminated (BSI), stacked sensor (a first for Canon) is a significant upgrade over the 1DX Mark III’s 20-megapixel sensor. Canon says it “achieves resolution performance exceeding that of the 30.1-megapixel EOS 5D Mark IV,” despite having a lower pixel count.

With the BSI/stacked sensor and latest DIGIC X image processor, the R3 can shoot at 30 fps in electronic shutter mode (down to 1/64,000th of a second) or 12 fps with the mechanical shutter, with full AF tracking and auto-exposure. Better still, it offers blackout-free shooting in electronic mode and the high readout speeds deliver minimal rolling shutter distortion — making it feasible to shoot sports or action with the electronic shutter. 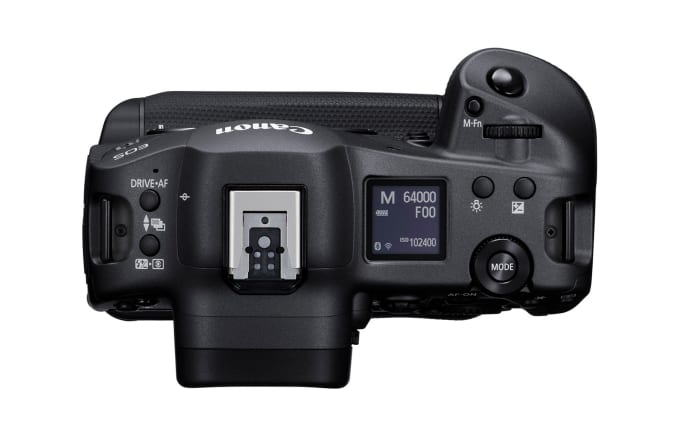 The EOS R3 is Canon’s first EOS model to support flash photography in electronic shutter mode. That allows for blackout-free flash shooting at up to 15 fps (at 1/180th of a second), which would probably look pretty wild in person. It also offers a silent shutter mode that turns off the artificial shutter and AF acquisition sounds.

The EOS R3 has a number of new autofocus features, too. The flashiest is Eye Control AF that locks onto focus wherever your eye is looking when you half-press the shutter button. It can be used in combination with flexible zone and subject AF tracking, so it’s “possible to quickly shift the target between multiple subjects,” Canon says. It notes that the feature can be calibrated differently if you have glasses or contacts, and that “some glasses/contacts may prevent calibration.”

Faster calculation speeds give the EOS R3 some new autofocus powers, too. The Dual Pixel AF system can now track in spot, single-point and flexible zone AF, and in lower light (-7.5 EV) than any other model. It can also acquire a subject just by getting close to it, so it will track an animal or human’s head, face or eye if you place the AF point near their body, for example. 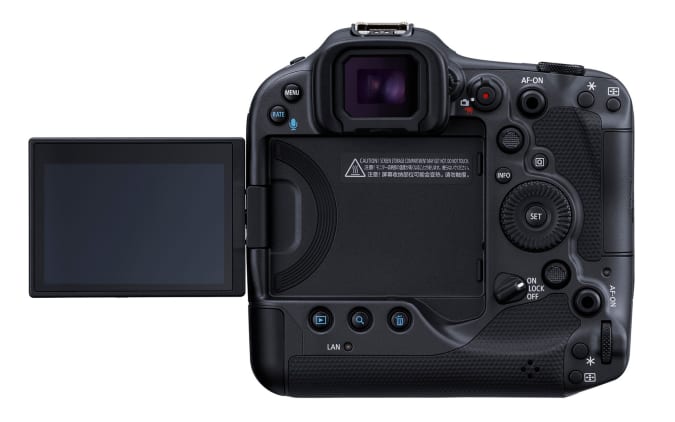 On top of body, face, head and eye detection for humans, the R3 offers a new “Vehicle Priority” tracking system for open cockpit, GT and rally cars, along with on-road and off-road motorcycles. If the AI detects a helmet (on a motorcycle or open cockpit car), it will automatically lock onto that.

The new sensor delivers improved low-light performance too, with the EOS R3 having a normal range of ISO 100-102,400 for stills (expandable to ISO 50-204,800). Canon also promises improved automatic and manual white balance via new AI skills.

The 5-axis in-body stabilizer is the the same as the excellent system on the EOS R5 and R6. As with those models, it delivers up to 8 stops of stabilization with compatible lenses, down to a minimum of 6 stops (still beating most other brands) with other lenses. It also comes with dual card slots, supporting SD and CFexpress type B cards.

The R3 comes with a new 5.76 million dot, 120 FPS OLED electronic viewfinder (EVF) developed by Canon. This is a key feature for the sports photographers who might buy it, as many haven’t switched to mirrorless because they prefer an optical viewfinder. Canon said it provides a level of clarity and field of view similar to an optical viewfinder “thanks to the HDR technology and high brightness performance.” Like the R6 and R5, it also offers a fully-articulating, 4.15 million dot flip-out touchscreen — ideal for video shooters. 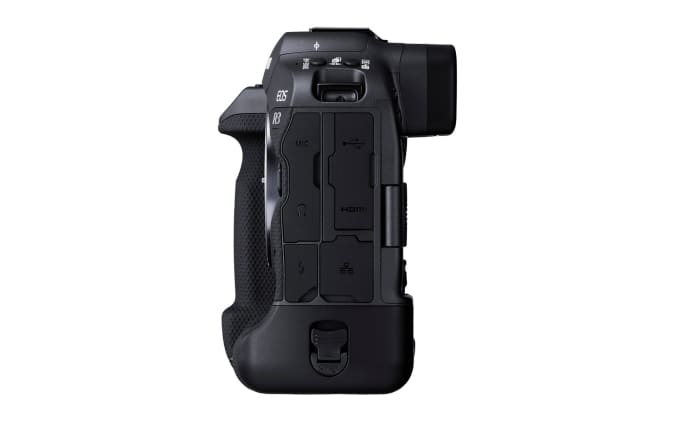 In fact, the R3 is also a highly competent video camera, too. While it can’t shoot 8K video like the R5, it can capture RAW 12-bit 6K widescreen (6,000 x 3,164) video at up to 60 fps to a CFexpress B card, besting Panasonic’s video-centric S1H. Canon has yet to say if 6K RAW over HDMI will be supported, however.

It also offers 4K recording at up to 120 fps, albeit in a cropped 1:1 pixel mode to a CFexpress card. Still, you can capture 4K 60p or 30p video using the full width of the sensor, which should make for some crisp video. Again, for the best quality, you’ll need a fast SD UHS II or CFexpress card. 10-bit 4:2:2 video will be available for all 4K modes in either HDR PQ or Canon Log 3 modes, with both All-I and long-GOP file options.

As usual with Canon cameras, the Dual Pixel autofocus should be a strong point for video, as it can lock in to a subject quickly without any hunting. As it stands now, however, the Eye Tracking feature only works for photography, not video. Still, the extra tracking features should make it extra powerful in terms of video autofocus, but we’ll need to test the R3 to verify that. As you’d well expect, it has microphone, headphone and HDMI ports — though the latter is a micro and not a full-sized HDMI connector, unfortunately. 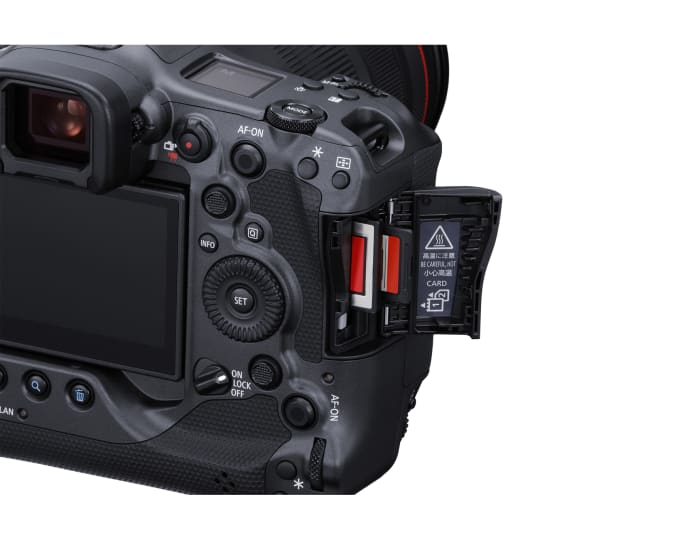 What about heating, the bugbear of the R5? Again, Canon has significantly improved the R3 here. It now offers two temperature options for auto power off: standard and high. The latter will let you shoot 6K RAW or 4K All-I at 60 fps for 60 minutes or more, though the camera might get a bit hot to the touch. 4K 120p All-I is limited to 12 minutes in either mode. Canon promises that you’ll be ready to shoot again after just five minutes, though shooting times afterward will be limited in 6K 60p and 4K 120p modes. Normal 4K 30fps shooting (down-sampled or otherwise) has no heat limitations.

Other features include network streaming functions and wired or wireless transfer to a 5G or LTE smartphone. It uses the 1DX Mark III’s LP-E19 battery that delivers 440 shots with the electronic viewfinder and comes with a new electronic hot shoe that supports more accessories, including a smartphone link adapter. Finally, the EOS R1 offers dust and drip resistance equal to the EOS-1DX series DSLRs, and weighs in at 1015 grams (2.24 pounds) including a memory card and battery.

Along with the EOS R3, Canon unveiled two new lenses, the compact RF16mm F/2.8 STM ultra wide angle model priced at $300 (left) and the RF100-400mm f/5.6-8 IS USM model priced at $650. Both of those should be decent budget full-frame RF-mount options if you’re looking for an ultra wide-angle or tele zoom lens.

With the EOS R3, Canon has built a supercharged flagship that should appeal to both the serious photographers and videographers who have the bucks to afford one. It arrives at the end of November for $6,000 (body only).